Rebirth of the religious life

Return to the Religious Life 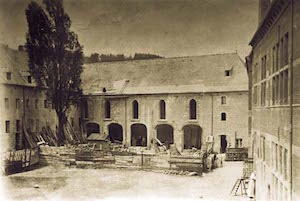 Passing from legacy to legacy, the Abbey was finally bought by Henry Collard, who resold it a few days later (on 29 November 1902), by means of a document drawn up before the notary Alfred Laurent of Dinant, to the Premonstratensian canons of Frigolet near Avignon. They were expecting to be expelled from France under the Combes law, which prohibited communities without “social usefulness” to own landed property. They sought refuge in Leffe in mid-April, 1903. Unfortunately, the buildings were not at all ready to receive them. Large-scale works were undertaken, particularly with the help of the Bishop of Namur, Right Reverend Thomas-Louis Heylen, himself a Premonstratensian and formerly abbot of Tongerlo.

“On arrival, we put all our ardour into organising the house in order to make it habitable, since we arrived at a real demolition and building transformation site ... When the community was more or less accommodated, we dreamt about building a chapel. Until then, we contented ourselves with a big room, beautiful enough, but not adequate for the celebration of our solemn masses and most importantly, for the reception of the faithful. The north aisle of the ancient Abbey church which was then a huge barn, was chosen for conversion into a chapel ... The beautiful paintings by Mignard, which we had taken out of the woodwork of the church of Maria Adjutrix would certainly have disappeared after our departure from Frigolet. The stalls of the former chapel of St. Michael which followed us, furnished the choir ... Moreover, we had sent for our entire sacristy, its ornaments and sacred vessels which we had prevented from being confiscated and hidden with a devout family in Maillane, which had carefully guarded them. The Belgian government exempted them from Customs duties ... The ancient barn of Leffe disappeared and, decked and ornamented like a bride, it had become a house of God” (A. CHAIX, Order of the Premonstratenians, “The Premonstratensian priests of Frigolet in exile”, Le petit messager, 1966.)

The canons restored the buildings and housed a new Abbey church in the barn built in 1710 by the abbot Perpète Renson. 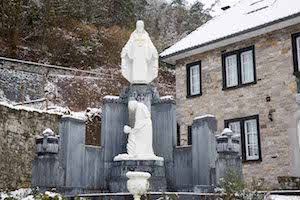 The exiled community suffered the harsh consequences of the invasion of Belgium by the Germans. On 15 August 1914, battle was joined at Dinant. After being pushed back by the French army, the Germans invaded the city on 21 August and between 22 and 24 August, 674 civilians were executed and 950 houses set on fire, in reprisal for the murder of German soldiers by alleged guerrilla fighters.

Two religious who wanted to flee by the Leffe below the Abbey, were killed by the Germans, but among the inhabitants of Leffe brought along by the Germans on the morning of the fatal day, 43 men including the Abbey gatekeeper, were ordered to come out and were shot in the Abbey square, together with 31 others. With its total of 227 civilian victims, Leffe holds the sad record for the number of victims in the Dinant area.

Father Adrien Borelly, then prior of the Abbey, has given a discursive account of the tragic events which took place on 23 August 1914:

On 23 August 1914 at about 7 o’clock in the morning, German soldiers arrived at the Abbey and breaking down the doors and penetrating by force into the houses, drove before them groups of inhabitants whom they had brought, terrorising them and forcing them to keep their hands raised above their heads. At around 9 o’clock, the cloister was already sheltering over three hundred panic-stricken people. Some time later, an officer came and gave the order to assemble all the men. The religious, convinced that this was roll call, rounded up all the men dispersed over the house. All the men, forty-three in number, paraded before the officer. One minute went by... a cry of terror was heard... from these forty-three men... shot in the square of the Abbey, against the white wall of Servais house. On the same day, 23 August at about midday, an officer of the 178th Saxon regiment, introduced himself to the Most Reverend Father and said to him: “You must pay 60,000 francs, for having fired on our troops. If that sum is not paid within two hours, your house will be burned”. Father Abbot vainly protested that they were all innocent but the officer persisted in his demand. The Most Reverend Father then asked for at least a reduction of a sum which would not be found either in the house or outside it. Finally, the officer agreed to refer the matter to the superior who had sent him. He returned after a while and announced that they would be satisfied with 15,000 francs and that he would return at exactly 3 p.m. at which time, in the absence of payment, the monastery would be immediately set afire. It was necessary to yield to the threats. The women prisoners were told about the situation, which was so critical for everyone. They clubbed together in order to collect he sum, which the Abbey safe could not supply. We thus managed to collect, with considerable difficulty, 15,000 francs. At the appointed hour, the officer returned, this time accompanied by soldiers with fixed bayonets and by other officers. He himself pointed his revolver at the Most Reverend Father, then placed it on the desk within reach, removed his gloves and counted the 15,000 francs spread on the table, coin by coin. He then put all the money in his pocket, declaring that he did not want to accept ecclesiastical money. He gave a German receipt, written in advance and left with the revolver in hand. 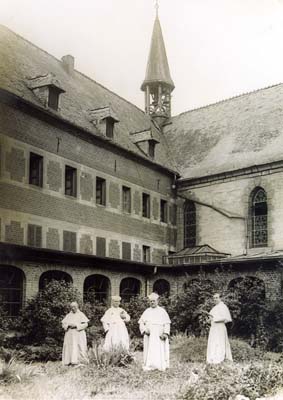 On 24 August, a search was conducted and the discovery at the Abbey of a rusty pistol and an ancient halberd used by the Abbey verger, supplied a pretext for accusing the Fathers of rebellion. The religious, driven from the Abbey, were imprisoned in a regimental school. On 28 August, seventeen religious swelled the column of prisoners leaving for Germany. The prisoners stopped at Marche in Luxembourg. There, they found the Carmelites of Tarascon, in exile in that town. The German authority made them prisoners on parole and on 24 September, General von Lonchamp restored their freedom and exonerated them. The community took refuge with the Benedictines of Ligugé, in exile at Chevetogne and remained there until December.

The then prior, Father Adrien Borelly, went to Leffe to check on the state of the place. The Abbey had temporarily been converted into a prison for 1800 women. Some days later, the community returned to Leffe. Of the sixty religious who had left Frigolet in 1903, only thirty survivors remained in 1919. Father Adrien Borelly, newly elected abbot, re-established his community in Provence in 1920. Father Léon Perrier, later abbot of Frigolet, remained at Leffe as superior, until his election to the abbacy in 1928 and was replaced at Leffe by the retired Father Abbot Adrien Borelly. 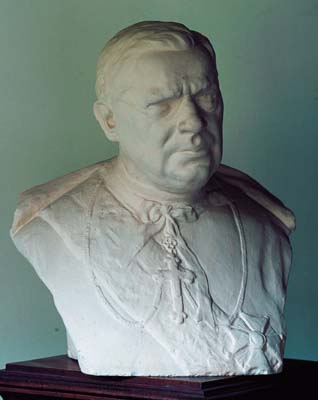 On 28 April 1929, a fire destroyed a part of the Abbey of Tongerlo. On 2 May, abbot Perrier offered by telegram to receive a part of the homeless community. Thus, 35 novices, accompanied by some priests, arrived at Leffe. Their spiritual leadership was provided by Father Borelly. The Bishop of Namur, Mgr Heylen, who had been the prelate of Tongerlo and had always since shown great solicitude for Leffe (having already intervened in 1902), rejoiced to see the religious of his “campinoise” Abbey, sent by their abbot Hugues Lamy, settled there. 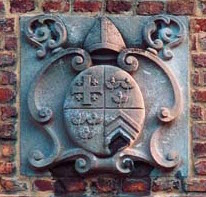 In December 1930, Leffe was officially transferred to the Abbey of Tongerlo. The novices returned to Tongerlo in the middle of the following year, but Leffe did not fall into disuse. Flemish religious remained there, steps were taken and on 3 November 1931, by means of the apostolic letter Refert ad nos, Pope Pius XI restored to the Abbey of Leffe the status of an independent house, which became a daughter house of the Abbey of Tongerlo and was incorporated into the circary of Brabant, Father Joseph Bauwens becoming its 53rd abbot. Legally independent, the Abbey remained very vulnerable in the matter of finance. Mgr Heylen who had intended to help the reborn community, gave up the project. Some time before, his trust had been betrayed by the unfortunate affair of the Namur Boerenbond, forcing him to pay off heavy debts from his personal resources. The community lived by expedients; the young brethren manufactured incense and ink, sold throughout Belgium by brother priests, travelling often on foot. These meagre revenues just sufficed to ensure the physical survival of the community. This situation lasted until the war and beyond.

A man of taste, Mgr Bauwens had no difficulty in doing a great deal with very little. We owe to him the fitting out of the refectory, the building of the neo-Baroque tower in the extension of the porch and the well-known bell tower built on an ancient square tower and from which, every quarter hour, a Jack-o’-the-clock, originally intended for the collegiate church, plays the notes of an antiphon to the Virgin Mary. A permanent fiftieth anniversary deposit of works of art belonging to royal museums and established at that time, contributes to the embellishment of the Abbey to this day. 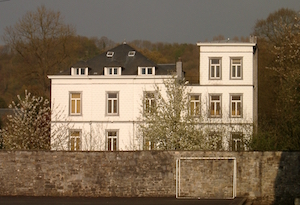 But the trials of war returned to disturb monastic life. The majority of the Fathers left for the front as army chaplains and two of the religious were wounded in an air raid. At the time of the 1940 fiasco, young brethren left, together with their instructors, for Toulouse. Then, for a few months, they found asylum at Espaly, in the diocese of Annecy, where there was a Premonstratensian community, a branch of Frigolet. They returned on 28 August, to find their Abbey almost intact, bravely guarded by old Brother Remy, helped by Brother Bronislas. Relatively minor damage caused by a bomb and four shells, provided incentive for an in-depth restoration of he buildings. Another alarm brought the novices to Tongerlo, at the time of the so-called “von Rundstedt’s” offensive at he end of 1944. Throughout this troubled period, Father De Bruyn, a Premonstratensian of Tongerlo living at Leffe, worked in concert with the Jesuit, Father Capar, to operate an “institution for sheltering city youth”, installed in a neighbouring large house owned by the Abbey, which later became St. Norbert’s rest house. This institution was only a front to allow some 40 Jewish children to be received and hidden from the Germans...

His health increasingly deteriorating, Mgr Bauwens retired during the war and in 1944 returned to Tongerlo. Father Hugues Lamy, the abbot emeritus of Tongerlo, succeeded him, first as administrator and then as abbot. The latter, French-speaking, born at Fosses-la-Ville, was a well-known historian who had published numerous works on the Abbey of Tongerlo and on the Premonstratensian Order.